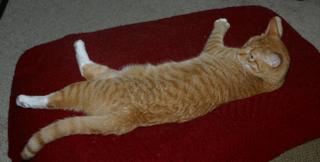 For a little over a year we've happily lived with our 3 cats Boo, Jinx, and Ping. As a short explanation; last summer someone dropped these 3 cats off near our house and they came to live with us. We could only surmise that they had been together their entire lives ( they were not yet a year old according to our vet). Happy we all were, except for one thing, none of them wanted to be a lap cat. So, after a year I began a search to add one more cat to our family. After several months, I adopted Abby from a rescue group. She is our Manx, and she is 6 years old. We took lots of time introducing her to our 3 existing cats. It was over 6 weeks before we allowed them all together unsupervised. As fate would have it, Button, who was another stray that adopted us, became missing this past July. We went to Animal Control in our area to make sure she had not been captured. Unfortunately, we did not find her. But, what we did find was Gracie, who we took home. Gracie is only 6 or 7 months old. We took several weeks to introduce Gracie to everyone, and just this past weekend we allowed Gracie to be unsupervised with all the other cats.

NOW, about Ping -- in late july, he sprayed for the first time, and he has done so a few more times since that date. This last time was this previous weekend. He came and did it on the chair I was sitting in (holding Abby in my lap). I recognize he is upset, troubled, and unhappy about the addition of not ONE, but TWO cats in a very short time. It was not something we had planned to do. He needs help. All of our cats are neutered or spayed. I have gotten Feliway and it helped at first, but it is not working as well now.

Any suggestions to help a poor poodie out?
Mews by ANGEL ABBYGRACE at 6:10 AM