I hope you'll take a moment, well actually nearly 4 minutes and watch this video of Joey & Rory Feek of the song WHEN I'M GONE. Joey recorded it in 2012. She was good friends with the songwriter Sandy Lawrence whose Mother was going through cancer and died. Joey was touched by the lyrics in the song, not knowing at the time of her own cancer journey to come. In retrospect it is such a haunting poignant testament to her own story .Anyone who is familiar with the struggles of the Feeks, spoke about know how much truth there is in the lyrics, to their story and countless others.
***
I have a story that takes this song and how it touches my own heart.
It's also complicated just as life is in general.
Back in 1989 I married and in 2017 I got divorced.
But in-between those dates were a lot of miles. Some good, some not so good.
I don't know about most people but I looked at divorce as a failure. A deep loss of something that started out well intended but ended up terribly messy and a train wreck. Then when you throw in a depilating disease in this case, which was Parkinson's, it complicates things even deeper.
Anyone familiar with Parkinson's know there is a physical side to it, but there is also a mental side which is by far the most challenging. My own opinion based on many years of being around Parkinson's is that it is a brain disease, more than a movement disease. There is no changing someone with Parkinson's, once you have it diagnosed, there is only progression of the disease. Being a caregiver to a Parkinson's patient is hard. Period. If you've not experienced it, good for you, because it is by far one of the most demanding things you could ever do. Think of someone with Parkinson's as a toddler with adult powers. You can't reason with Parkinson's, because one of the sad effects of Parkinson's on the brain is the inability to control impulses. So that toddler sees something they want....they go for it, doesn't matter the consequences. For us there finally came a breaking point of consequences. Sadly it came at the same juncture that my family was dealing with the life saving transplant surgery for a family member and also the decline of my Father who we lost in July of 2017. So death and divorce and life altering surgery, tumultuous uncertain times.
There were lots of circumstances that surrounded the uncoupling with my former husband, and it's not something I can easily explain, but suffice to say we remained friendly throughout the uncontested divorce and afterwards. He did not want to completely let go. So, I knew all of the things he embroiled himself in after our divorce. He continued to bad choices, and  now I can say that this was a life long pattern, made so much worse by the Parkinson's. He had a difficult life, but a  lot of people do and don't make the type of choices he did. So there isn't an excuse from me on that score, but the choices he made hurt himself so much. By the time of our divorce I felt like he had done me a huge favor.
As I indicated he was ill with Parkinson's disease and with the poor decision making he ended up having the State try to take over him for being incompetent. After a lengthy (and costly) court battle he won, I knew he would win because  by the legal definition he was not incompetent, he knew exactly what he was doing and doing so voluntarily .(I have come to have very deep convictions about this process, and again if you've not seen it firsthand, consider yourself lucky!)  That led him to being in a independent living facility where for a time he had some daily consistency. Of course that could not last, and he got himself ordered out of that facility and then he had to find another place to live, and this happened right in the middle of COVID.
In late January of this year he contracted COVID within that new (lock downed) ALF. He recovered in the hospital, and was sent to rehab where they made mistakes, he ended up back in another hospital and recovered to then be sent to another rehab and finally discharged back to his ALF at the tail end of March. He was only there for a short while until he started acting violent, which he has never done before. He was sent back to the ER and found to have an infection, they discharged him and sent him back to his ALF but his symptoms continued and he was readmitted at the first of April. It just went downhill from there. Very downhill and very quickly.
Then it turned to hospice.
Then finally it came to a complete full stop.
This past Monday he passed away.

What I didn't expect was how emotionally charged all of this would be for me. After all so much of the emotional toll went out of the bag in between 2015-2017.  I mistakenly thought emotional attachments were gone, but, as is life, this was convoluted. Once you know it's forever and it's really over and there's no going back you dredge up a lot of stuff. He and I shared more than 3 decades of ups and downs together, so many of the things that happened are woven into our life together. On Monday, I lost a lot of my past, some of the present, and any future that may have been there. Not a future of love but one of mutual memories and long term caring.
I do not believe my former husband a bad person, only one with many flaws and demons some of which he had no control over. He was plagued by many troubles, but he had good qualities about him and he shouldn't have had the ending he had. I feel exceptionally badly for him, and I mourn him deeply. I am sorry he is out of my life even though he made it difficult at times, I miss him already, which is so strange to say given our circumstances. Loss stays with you forever, and it affects you in a million different ways, and most of the time you never know from where. Farewell Wally, I hope you sail into calmer seas than what you found here on this Earth, and I hope you find the peace & healing you never had. And in the end I still carry the love and I just wish I could have told you while you were still able to hear it, but you will hear me from wherever you are now, and I want you to know I forgave you a long time ago. Yes, I will truly miss you, not the chaos, but the memory of the good I will miss, and I will only hold those memories inside me now.
The heart has it's reasons
of which
reason knows nothing.
1949-2021 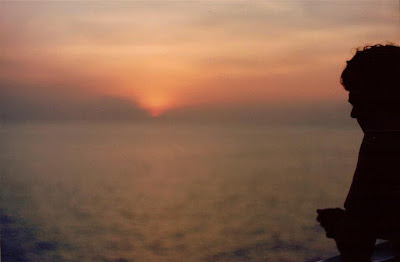 Taken from the cruise deck in the Bahamas 1989.
***
you'll wonder why the earth still moves,
you'll wonder how you'll carry on,
but
you'll be ok
on that first day
when I'm gone...
...
just give it time
we'll both be fine
when I'm gone.
Mews by ANGEL ABBYGRACE at 12:00 AM